Our pickup arrived sharp at 7 pm. Threaded our way through stifling rush hour Bangkok traffic to pick up a few more guests from neighbouring hotels. Onwards to the Si Phaya Express Boat Pier near The Sheraton Hotel. A pleasant 15 minute wait in the balmy evening watching the traffic on the river. Several photo opportunities. Met up with a few other dinner guests. Sharp at 8 pm our barge floated in and gently docked. What followed over the next 2 hrs can only be described as hedonistic! An amazing degustation menu of 20 odd items reflecting Thailands most exotic culinary traditions. Add to that the sights around the river. All washed down with a splendid Spanish Merlot-Cabernet Sauvignon.

​Thailand was mourning the passing away of the very popular Late King Bhumibol Adulyadej (King Rama XI). That's why most of the Wats and Buildings on either side of the river were dark. Entertainment and gaiety was toned down. We missed the magnificient sight of shining Wat Arun. Indeed we missed it in the darkness. But the cuisine compensated for all that.

There are two options for dinner cruise on the Chao Phraya. Either the large glittering triple deck modern river cruisers or the slow small converted teakwood rice barges.

Of the latter the Manohra Cruises and Loy Nava Cruises stood out from the TripAdvisor reports. We chose the Loy Nava because it was cheaper at THB 1,900, it had a successful history of 40 years, was stand-alone owner operated and TripAdvisor seemed to indicate the food was better. We were delighted with our choice.

We booked the cruise through our hotel concierge (we were staying at Centara Grand at CentralWorld. However online booking at the Loy Nava webiste is cheaper and easy .​ 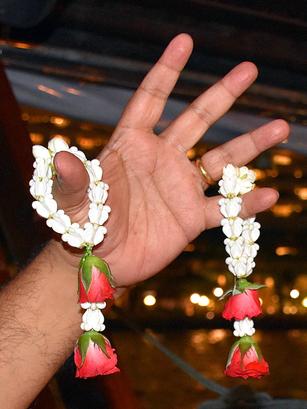 Cruise route. About 1 hr to travel north during which dinner is served. The next 1 hr to return south. Time for dessert, cigar, liqueurs and photo ops. 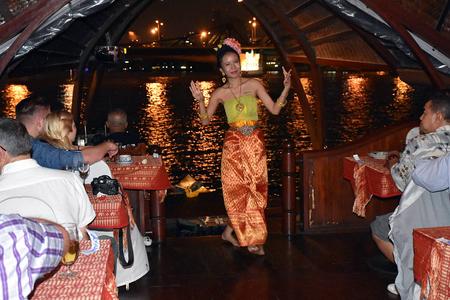 We lost the hotel drop-off service. Made our way back to the hotel in a Tuktuk. Fast racy drive through late night Bangkok traffic.

As the last of the Mains was being polished off, we were approaching the magnificent Rama VIII bridge. Subdued lighting because of the National mourning. But still striking.

A bite of a respite from the incessant flow of food and an opportunity for a glimpse of traditional Thai dance.

The boat crosses the  Rama VIII bridge and makes a U turn to head down river over the next one hour. 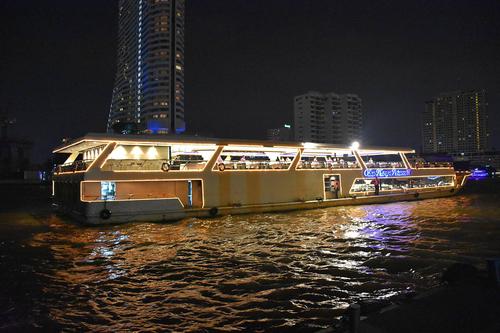 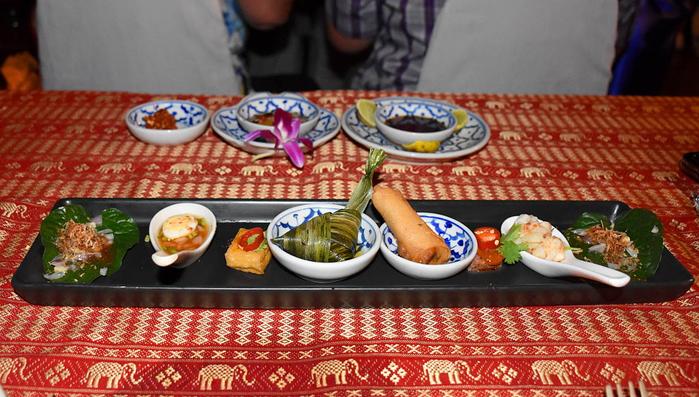 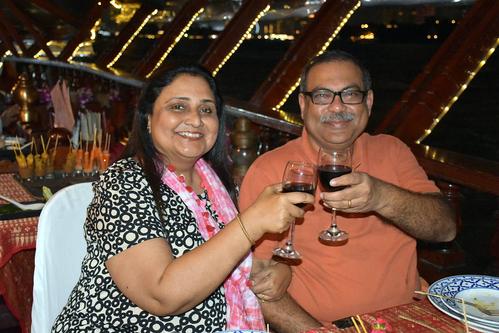 Mains #3: Scallops and Prawns with a spicy tangy sauce and salad greens. 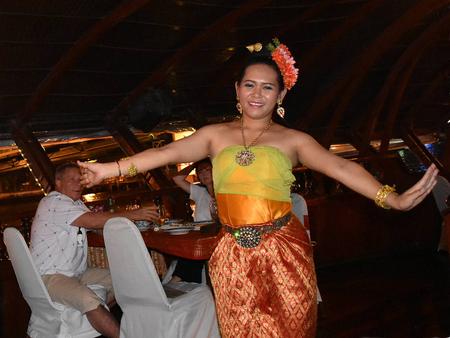 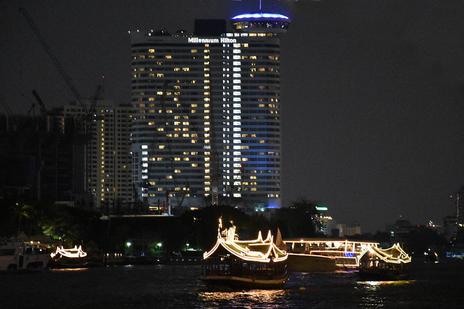 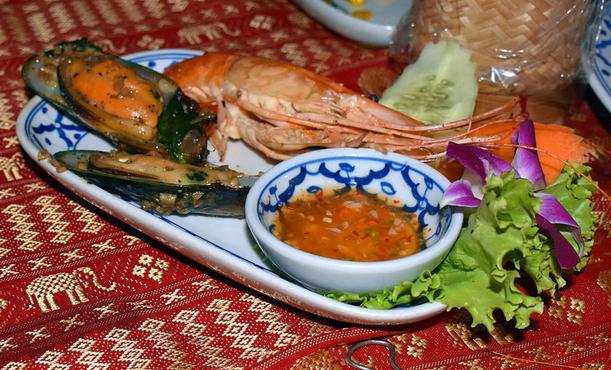 < Our converted vintage teak-wood barge approaching to pick us up. 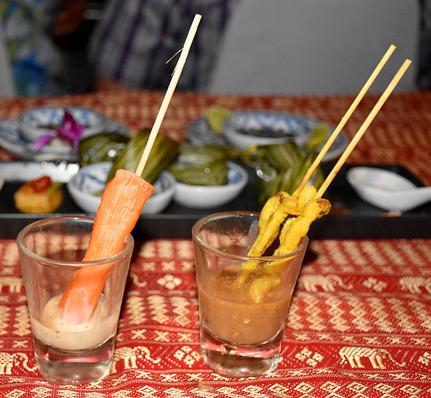 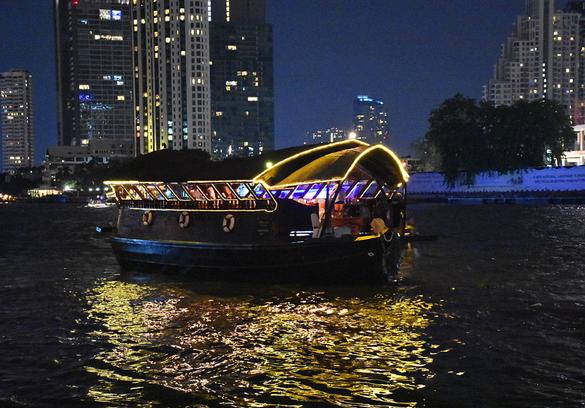 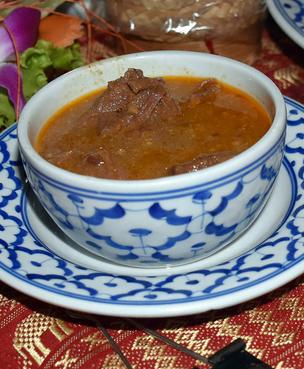 ​​Starters #1 (from left to right): Miang (one-bite-wrap) of Pomelo and roasted shredded Coconut on Betel Leaf;    Quail egg in lime, sugar, fish sauce, cilantro and onion;   Tofu with Capsicum jam and chilli (not hot but flavourful);  ​Chicken fried in Pandanus Leaf with sweet Thai Plum sauce;   ​Crab spring roll;   Marinated Tuna with some sort of topping;  Shrimps in some sort of sweet marinade and finally another Miang (Betel leaf with pomelo and coconut). 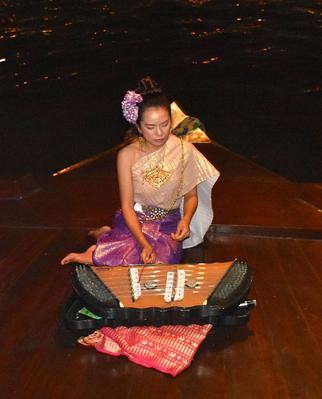 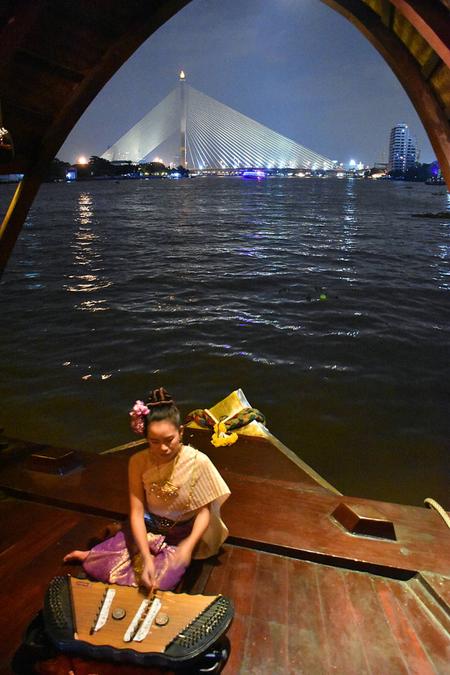 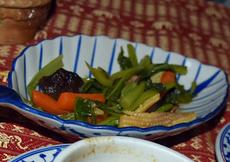 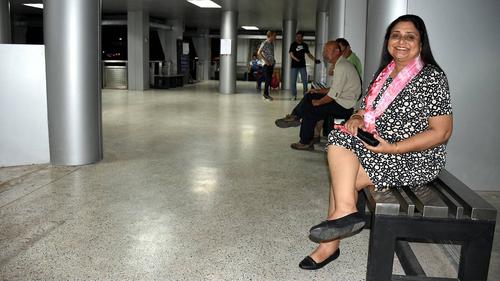 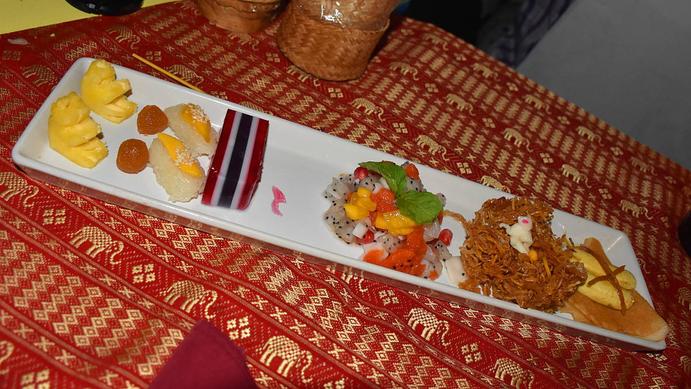 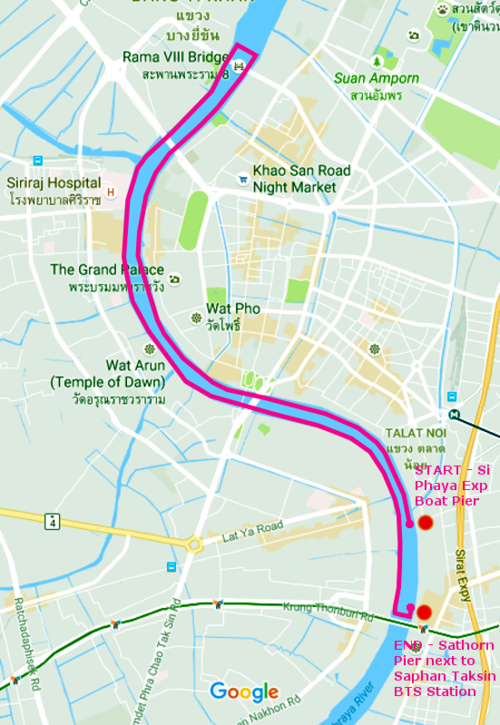 Then they served dessert and liquers. Desserts are perhaps the weakest area of Thai cuisine. None of the items really excited. In another half an hour we were at Central Pier at Saphan Taksin. 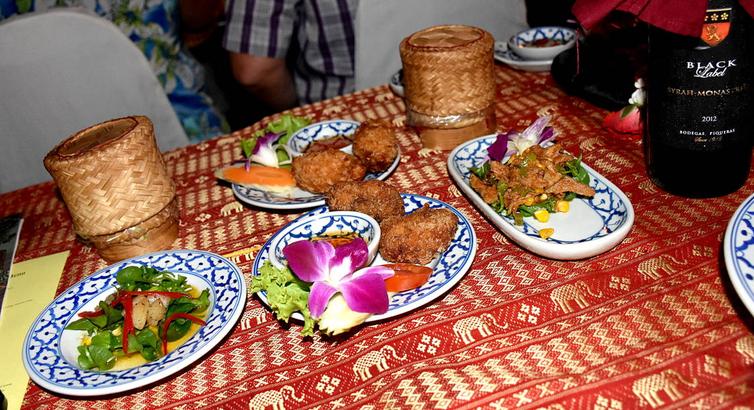 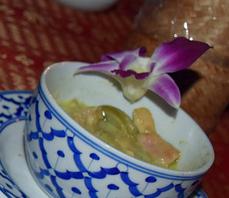 < Tables were neatly marked and everyone settled down quickly.

We chose a Spanish Syrah (Shiraz) from the extensive wine list > 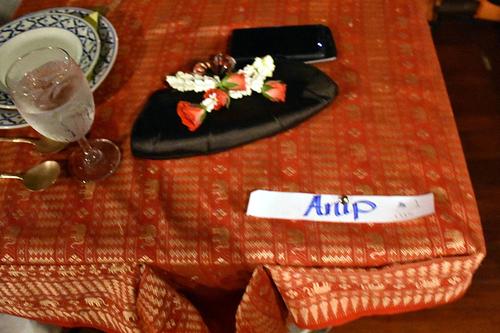 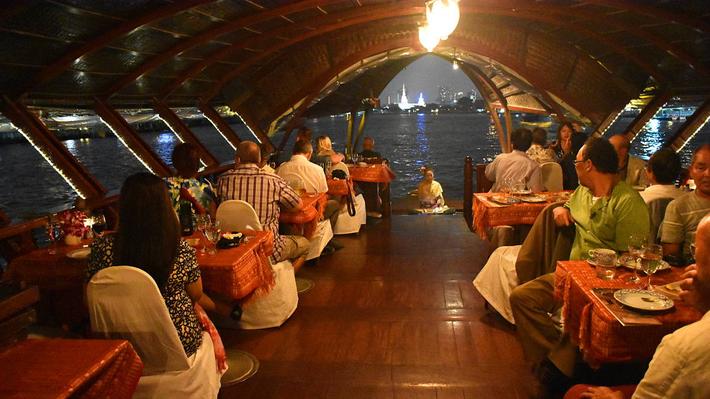 Gently cruising the placid Chao Phraya on a converted 60 year old rice barge, oozing history and character from its every teakwood beam. What comes along is a gargantuan Classic Thai dinner, impressive in its quality, quantity and variety. 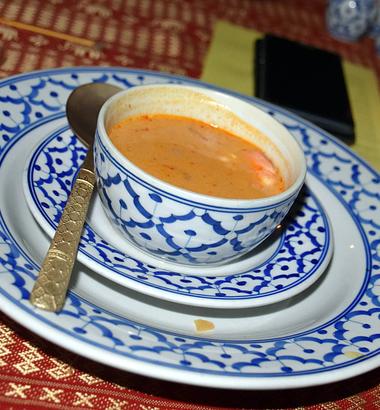 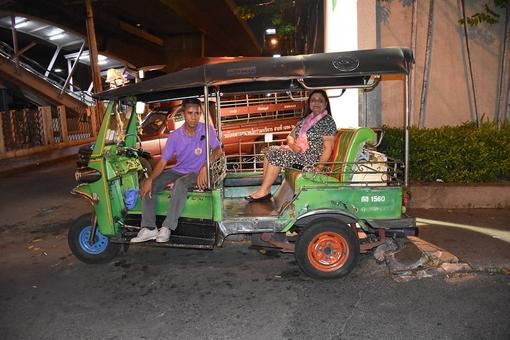 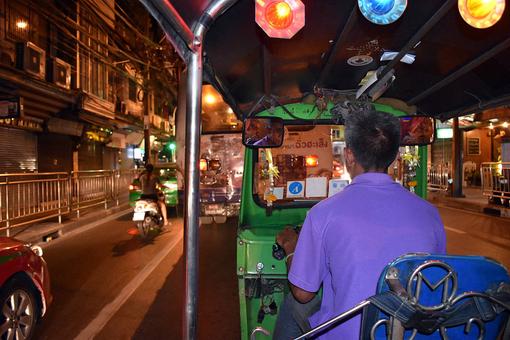