Plenty of Woodpeckers on those tall moss covered trees (10 km beyond Pangot, 4 km beyond Vinayak) 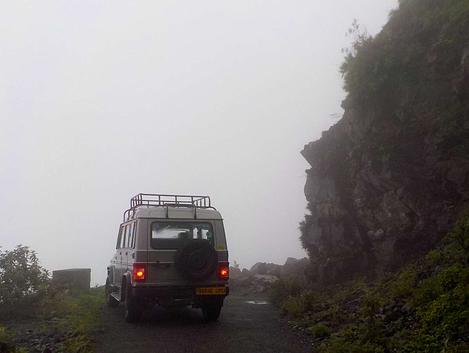 Spot where both Koklass & Khalij Pheasants are spotted (8 km beyond Pangot , 2 km beyond Vinayak)

Stopped at  a spot on the deserted road where Koklass Pheasant is often sighted (10 km beyond Pangot , 4 km beyond Vinayak) 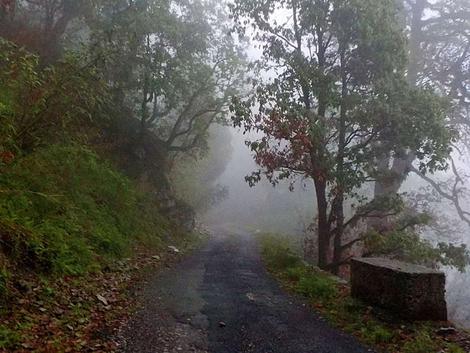 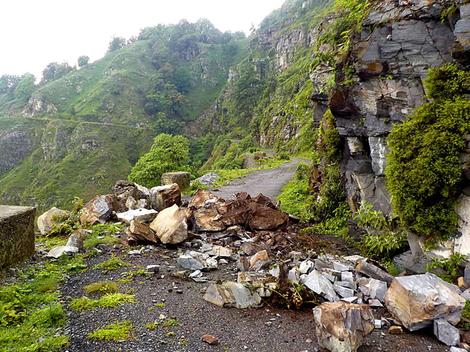 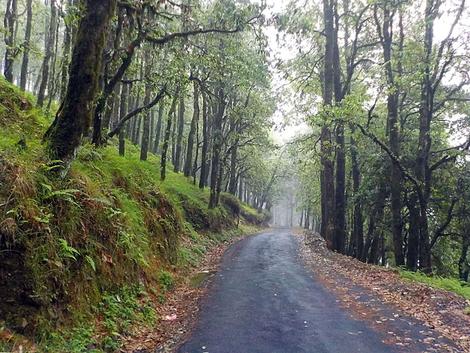 Birder's paradise in the lower Himalayas between 6000' and 7500'. Rustic and up close with the hill folks. Amazing variety of birds, a lot of which is endemic to the region.

The 4 am alarm on my cell phone gently brought me into the now and here. The momentary displeasure of interrupted sleep was immediately overcome by the anticipation of a whole morning of Birding at one of the richest tracts of the lower Himalays. Peeping out of the window from below my quilt, I tried to make out what lay outside. Far as I could make out it was dark, cold and the pitter patter of rain on the trees outside was ominous. Rain is anathema to successful Birding.

Whatever, made myself a cup of tea and got ready. Took care to wear ankle boots, thick socks and narrow bottomed trousers. This was leech season and I would be rambling off road a bit. Didn’t want to become food to the legions of leech just waiting for a warm blooded creature to walk by.

Well before the appointed 5 am, Chauffer-cum-Guide Harish came over to Jungle Lore to pick me up. We started in his trusty old Mahendra Bolero. Camera on the seat beside me, Field Guide next to it, Binoculars slung around my neck. Excitement often tempered with disappointment as clouds came rolling in to blot out whatever visibility the overcast morning light offered.

We were on the road to nowhere! A narrow but very well constructed road strikes off towards the north-west from Nainital. 15 kms down that road is the small village of Pangot where we were staying. The road snakes on for another 28 km through dense forests of Silver Oak, Fir, Rhododendron and Deodar, past the village of Sigri and the Forest Range Office at Vinayak and then just two small villages before the road ends at the edge of Corbett. Earlier this was a forest road for official patrols to prevent theft of the wealth of timber and poaching. The road is now maintained by the State Public Works Dept but the main users are Forestry officials, villagers and Birders. During season, Birders outnumber all other travelers!

On that rain soaked misty morning it seemed me and Harish were the only humans in that dense green world. Indeed, all the localities we passed were still sleeping. Indeed, the first person I encountered was 3 hrs later and the first vehicle half an hour after that.

Harish stopped at a spot where he knew a few Koklass Pheasants were nesting. But that was down a steep forested slope and I wasn’t about to clamber down in that poor light. So we got down from the vehicle and looked around. A Blue Whistling Thrush flew in and perched on the safety barrier by the roadside. Heard a Rufous Sibia calling from the tree at my left. Harish was scanning the slopes below with his Binocs. Suddenly his excited whisper, “Koklass”, as he pointed down! I whirled around and could clearly see the silhouette of a Koklass Pheasant and her three grown up Chicks foraging below. It was a pity that I couldn’t capture them for posterity in the low light.

It started pouring soon after and became rather foggy. We slowly drove on and heard what sounded like thunder close at hand. Harish was immediately alert and seemed apprehensive. But I put down hid discomfort to difficult driving in that rain and mist. 15 mins later we saw what we had heard earlier. A small landlside! Road ahead was blocked. The rumble that sounded like thunder to my ears did not deceive the experienced Harsih. He immediately knew it would be a landslide. His only concern was whether it was up ahead or behind us. Fortunately for us, had we not spotted the Koklass and spent 15 futile minutes trying to photograph it, we would have crossed the spot before the landslide occurred and then we would have been stuck on the other side for the next few hours.

But not a problem, the spot where we halted was Cheer Pheasant habitat. We parked and started looking around. Didn’t see any Cheer but saw a small herd of 8 Mountain Goats, Swifts, Grey-winged Blackbird and the ever present Rufous Sibia.

The cloud began clearing up revealing fantastic views to the south of valleys and slopes. While Harish crossed the landslide on foot and went exploring for Cheer along the road beyond, I backtracked to a grove of tall Deodars in search of Woodpeckers. Sure enough, spotted a female Rufous Bellied Woodpecker foraging up and down the trunks of the Deodars. I was frantically clicking away, dashing around and across the road, to keep her in sight. There wasn’t a soul for miles around. I shot of a few quick ones and turned around and suddenly I froze! Like an apparition, an old wizened head emerged above the road from the abyss beyond. The old man climbed onto the road. I was so alarmed I lost the Rufous Bellied. Wildly imagining ghosts who dwell in those dark high forests. Then the chap gave me a wide toothy grin and we struck up a conversation. He was a shepherd from the village I could see far below. He was tending his small flock of buffaloes which were grazing on the slopes. He saw me prancing around on the road and came up to investigate what the madman was upto!

I was on that road the next day as well in bright sunlight with a clear sky. Went upto the area called Fields at an altitude of 7600 ft where the road levels off for a bit with wide open spaces all around. That was about 18 km from Pangot. Excellent birding even though it was way outside ideal birding season. The migratory species haven’t yet arrived and it was breeding time for the residents. That meant they preferred to spend more time at or near their nests which were invariably away from the road, deeper inside the forest. But even with such limited bird movement, I saw 32 species. 18 of those were “Lifer” for me i.e. Saw them with my own eyes for the first time. Managed good to passable pics of many of those.

If this was the low season when you get to see only the odd residents, I wonder what it would be like in winter when thousands of migrants arrive and both adult, as well as juvenile residents are footloose and fancy free without any breeding demand! Pangot, I definitely have an appointment with you in winter! 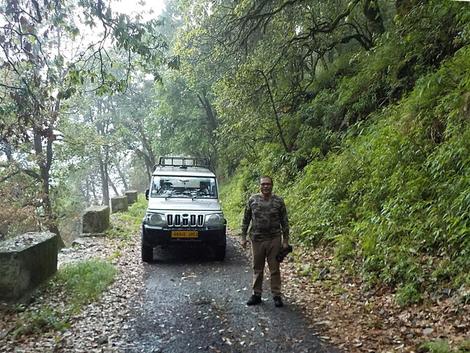 Road blocked by a small landslide after heavy rains through the night (11 km beyond Pangot, 5 km beyond Vinayak) 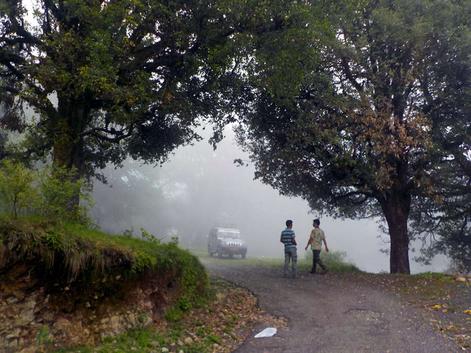 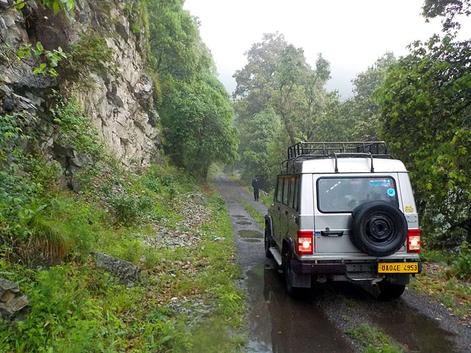 Soon the weather cleared and we could see the landslide better (11 km beyond Pangot, 5 km beyond Vinayak) 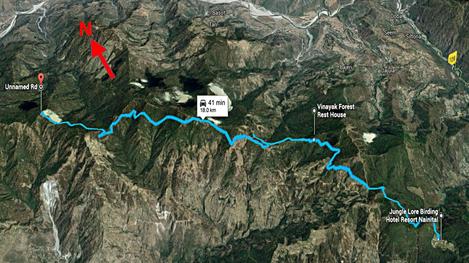