​​​​Pic 01 - First halt at Head Quarters of Kolkata Municipal Corporation. Nobody seems to know how those two centuries old canons by the main entrance came to be there.

​Pic 03 - Futnani Chambers. From 40s through to the 60s, Daddy Mazda ran the Golden Slipper on the top floor of Futnani Chambers. One of the classiest night clubs in south Asia. Downstairs, the Paris Bar with a more raunchy reputation has been around for a while as well. Building looks dilapidated enough for being home to Ghosts. Especially that eerily lit up upper floor room!

Pic 07 - Federico Peliti from Italy was Lord Mayo’s chef. After his assassination, Federico stayed back in India and started the first Italian restaurant in India at this site, 11 Old Court House St. All that survives is this plaque and the building.

​Pic 09 - The first luxury hotel in Asia was the Spence’s Hotel which existed where present day AG Bengal has its offices. On Old Court House St. The second hotel in Asia and far more grand in scale was the Great Eastern Hotel. Opened in 1841.

The hotel was electrified in 1883 and was the first hotel in India to use electricity.

​Pic 11 - No body seems to know how these 4 two hundred year old cannons came to be here at the Head Offices of Hindusthan National Glass & Industries at 2 Red Cross Place. There are 3 more cannons inside the building.

Pic 13 - While Governance in 18th and 19th Century Kolkata was largely controlled by the English, the Scots dominated Industry and Commerce. Life Insurance Company of Scotland  became Standard Life Assurance Company in the early 19th Century. Most British insurance companies of that time avoided insuring lives of those who worked and lived in the British Colonies. Because of the high mortality rates of those locales. Standard Life’s specialty on the other hand, was insuring those risky lives and they were very successful. This magnificent Victorian building constructed in 1896 was their India HO.

Rodda & Co, a prominent arms dealer of early 20th Century, had their showroom down that lane called Vansittart Row. In 1914 revolutionaries of Jugantar and Anushilan Samity made off with 50 Mauser and 46,000 rounds of ammunition. Those guns were extensively used the freedom movement.

Many thanks to Mr DBH Ker for validating the history of the building.

Pic 15 - Memorial to those who perished in the Black Hole of Kolkata incident. At the north-west corner of St John's, vissible from Church Ln.

Pic 17 - Town Hall built in Roman Doric was completed in 1813. Architect Col John Garstin designed several other buildings at Kolkata as Chief Engineer of the Bengal Engineers.  Garstin Place off Hare St is named after him.

Pic 19 - Cast Iron Street Orderly Bin installed on the pavement just outside the Judge's entrance at Kolkata High Court. Neo-Gothic building constructed in 1862. Many interesting stories of resident guests there. 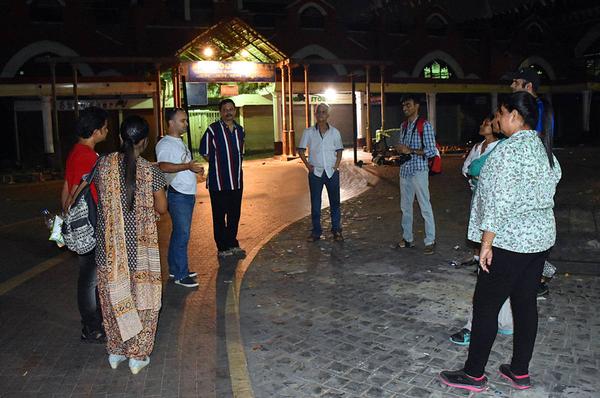 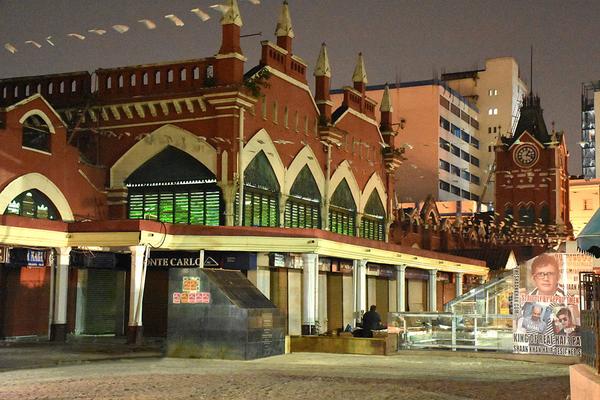 Pic 04 - Next halt, dilapidated memories of Bourne & Shepherd. After 176 years of continuous operation, the studio finally downed its shutters in June 2016. The oldest studio in the world became history. Wouldn’t be surprised if those, whose photos are stored there, come back once in a while to see how they looked when they lived!
​

Pic 06 - Statesman House is home of The Statesman. Built in 1875 this building has two interesting resident ghosts. Someone still types on a manual typewriter at odd times thru the day. The clattering is quite noticeable. Then there is this gentleman in formal suit, top hat and pipe. Most probably he is not a ghost but a poltergeist. He wanders around, opening filing cabinets and taking out files.

Pic 08 - The building housing fine restaurant with an option for alfresco dining, still stands. Sadly its a warehouse now.

​Pic 10 - Stables of the Governor’s House (Raj Bhavan) on what is now known as Red Cross Place, had stairs on the outside. That’s because the horses inside would muck up the courtyard and it made sense to avoid the muck!
​
Pic 12 - There were some 30 odd statues all around Dalhousie Square (Binoy Badal Dinesh Bag) at one point. All those statues have been removed except this one. Maharaja of Darbhanga still lords over the south-west corner in his full official regalia.

Pic 14 - Standard Life’s company logo was a depiction of the biblical Parable of the Ten Virgins (Matthew 25:1-13). The message was simple…those who are prepared always win! Take a Life Insurance!

The plaster sculpture survives to this day at the top of the building.

Pic 16 - All India Radio had their studios at this very spot. They tore down the building and relocated to Eden Gardens in early 60s. In those days AIR’s musical broadcasts had 10 minute intermissions during a British pianist would play classics. He did that for 37 years before he passed away. Everybody agrees that on quiet nights he continues to play Bach, Beethoven , Mozart et all, right here! We weren’t lucky enough to hear him. Maybe that was good!

Pic 18 - That 75 mm Cannon has a colourful heritage. It was manufactured by Krupp in Germany in 1897. Was used by the Boers against the British in the Second Boer War and was eventually seized by the British. After the war, several artillery pieces, including this, were shipped to India. From 1940 to 2006 this cannon was at the central Rotunda of New Market. Have seen it there as a child, whenever I visited New Market with my parents.

Pic 20 - Robert Clive came to India to retake Kolkata and Bengal from Siraj ud Dawla. He  defeated Siraj in the Battle of Plassey in 1757 and returned to Kolkata. In 1958 he started construction of a new Fort William at its present site by the River Hooghly.

To thwart attacks from land, he fired his canon at 3° intervals over a 180° arc, from north river shore to south river shore. Posts were planted wherever the canon balls landed. The area between the fort and the arc was cleared of forests. The arc was marked as boundary of Fort William. This is post #5…Fort William Boundary #5.

The cleared land gave the defending soldiers at the fort a clear line of sight if anybody attacked. It also resulted in our famous Maidan. Till date that land belongs to the army!​

Pic 21 - General Post Office came up in 1868 at the site where the first Fort William existed. Magnificent domed structure with tall Ionic-Corinthian pillars. A small 14’ x 18’ guard room at the north eastern corner of GPO is where 140 odd British soldiers and civilians were imprisoned by Siraj Ud Dawlah after he conquered the original Fort William. That was the Back Hole of Kolkata incident.

The walk is organised by Kolkata based speciality tour organisers LetUsGo and conducted by Anthony Khachaturian. Details at goeventz Tickets can be booked at the site as well. We found the booking hassle free and the back office team very helpful. As far as Anthony's knowledge of the city.... well, simply fantastic.

Our walk started from New Market. Otherwise known as Hogg Market. By the second half of the 19th Century, British population at Kolkata had increased significantly. Siraj Ud Daullah has been history for more than a century. Kolkata was the second city of the Empire. The foreigners wanted an upscale market of their own so that they wouldn’t have to brush shoulders with the natives.

Sir Stuart Saunders Hogg, the then Chairman of the Municipal Authority for Calcutta, as well as Police Commissioner of Calcutta, led the project. The Authority (Calcutta Municipal Corporation would be formed a two years later by the CMC Act 1876) purchased a longish piece of land between Fenwick Bazar and Chowringhee, from the Estate of Rani Rashmoni (by then she had passed away). This land became Lindsay Street. Fenwick Bazar itself was demolished and New Market came up at that spot.

Richard Roskell Bayne, an engineer with the then East Indian Railway Co was the architect and hence the Market’s distinct similarity with Howrah Station. Including the pointy arches across the entire façade. Macintosh Burn were the civil contractors. The market was inaugurated in 1874.

Incidentally Sir Stuart was of the Indian Civil Service, the percussor to our Indian Administrative Service.

Sir Stuart refuses to leave the market he created and can be seen roaming around the corridors at night, in his coat-tails and bow tie. Hopefully he ticks off the night cleaning staff if they don’t work well!

There were 10 of us for the walk this evening. We gather in front of New Market and Anthony introduces the itinerary. I instantly like his erudition and enthusiasm.